Colchester was an important garrison town before the outbreak of World War One, and as Headquarters of the Eastern Region, when war was declared in 1914 the town experienced a sudden influx of volunteer troops. At times Colchester’s civilian population of 40,000 was equalled by 40,000 troops, some of whom were billeted with local families with the remainder staying in tents and huts. The troops were trained at the Cavalry Barracks and on the Abbey Fields and practice trenches have been recorded at Colchester Garrison. 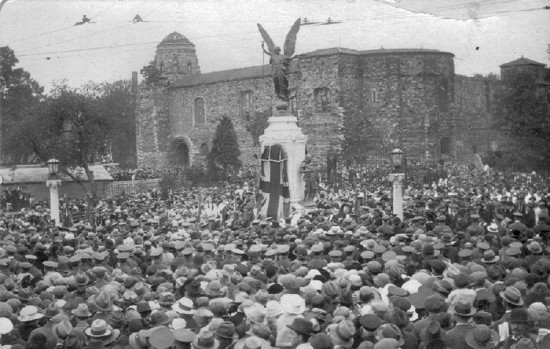 Colchester also played an important role in caring for those injured in the conflict, with thousands of wounded troops arriving in the town by train to be cared for at the military hospital and at six Red Cross Hospitals. The military commandeered 50 of the 100 beds at the Essex County Hospital, where two wooden Netley huts were erected as temporary wards for 150 soldiers. In 1918 marquees in the grounds provided a further 52 emergency beds.

The war memorial which stands close to Colchester Castle depicts St George standing on a dragon and peace holding a dove and is a poignant reminder of the human cost of the First World War to the people of Colchester. First World War memorials can also be found at Dedham, Great Horkesley, Little Horkesley, Marks Tey, Messing and Wivenhoe.