Following the Norman Conquest, there was a spate of church-building in and around Colchester, with wealthy patrons establishing monastic institutions and churches.

The most significant monastic foundation within Colchester was St John's Abbey, which was established in 1095-6. This large Benedictine abbey was located to the south of the town, and dominated this side of medieval Colchester. Prior to the establishment of the abbey, this site is reputed to have been occupied by a priest called Siric, and excavations within the abbey precinct revealed the foundations of a three-celled church.

Also to the south of the town, just outside the southern gateway, was the Augustinian Priory of St Botolph. This was also established on the site of an earlier church, and was re-founded during the late 1090s as a house of Augustinian canons, the first such foundation in Britain. 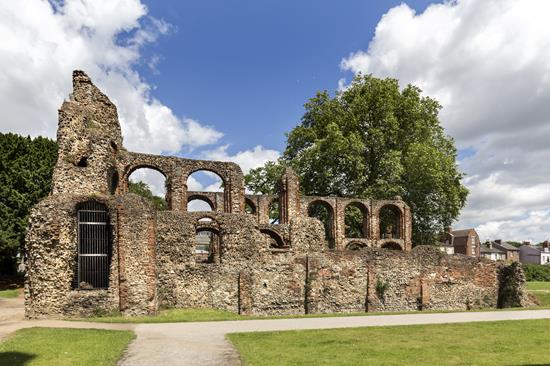 In the early 13th century, the Franciscan Grey Friars founded the house of Greyfriars on the north side of the High Street. A second community of friars was established outside the south-west corner of the town. These friars were Friars of the Holy Cross (also known as Crutched Friars), and the hospital and chapel that formed the House of the Crutched Friars was established on the south side of Crouch Street sometime before 1251. Excavations around this site in Crouch Street have revealed numerous medieval burials that are thought to belong to the friary's burial ground. As well as the Hospital of St Cross there were at least three other medieval hospitals within the town of Colchester. One of these was the hospital of St Mary Magdalen, which appears to have been founded in the early 1100s as an isolation hospital for lepers. This hospital stood on the north side of Magdalen Green, and the 12th-century chapel that formed part of this complex was revealed during excavations in 1989 on the site of the demolished medieval parish church of St Mary Magdalen. Once the original chapel had become the parish church of St Mary Magdalen, a new chapel known as the Maudlin Chapel was built for the hospital. This was discovered during excavations in 1995, along with a later medieval building thought to be a dormitory or living quarters.

The best-known medieval chapel within the town walls is St Helen's Chapel, on the corner of St Helen's Lane and Maidenburgh Street. Other chapels to St Andrew, St Thomas and St Mary are also known to have existed in the 13th and 14th centuries. New churches were also established in Colchester's suburbs during the medieval period. St Leonard's Church was founded on the north side of Hythe Hill at some time before 1150 and is likely to be linked to the development of the early medieval port at the Hythe. The parish church of St Giles was erected in the mid-12th century to the north of St John's Abbey. It closed in 1953 and is now a Masonic Hall. St Martin's Church on West Stockwell Street is thought to have Anglo-Saxon origins, and its west tower is a rare Norman survival which contains much reused Roman brick. On the High Street are the churches of All Saints, thought to date from the Norman period, and the site of the Church of St Nicholas which was extended and rebuilt in the Victorian Gothic style by Sir George Gilbert Scott in 1875-6 and demolished in 1955 to make way for the Cooperative department store. St Runwald's Church, which also stood on the High Street, was demolished in 1878 and is thought to have been an Anglo-Saxon building.