Colchester found itself at the centre of the English Civil War during the summer of 1648 when a Royalist army on its way through East Anglia to raise support for the king was attacked by a Parliamentary force led by Lord General Thomas Fairfax. The Parliamentarians' initial attack forced the Royalist army to take refuge within the walls of the largely Parliamentarian town of Colchester. The siege lasted for 11 weeks, with the Royalists only surrendering once news reached them of the defeat of the Royalist army at the Battle of Preston. 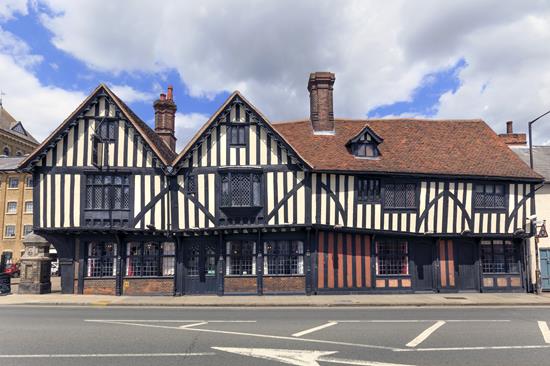 The siege had a huge impact on the town of Colchester and its residents. It is thought that during the siege as many as 200 houses were destroyed and many others suffered significant damage. The stripping of external plaster at The Siege House revealed many bullet holes in the timbers of the west side and south front, dating from the time of the siege. Several of the town's churches suffered extensive damage during the siege including St Mary at the Walls, St Martin's, St Botolph's and St Leonard's at the Hythe. The gatehouse of St John's Abbey was also badly damaged. Excavations in Osborne Street and Lion Walk have revealed remnants of houses which appear to have been destroyed during the siege or demolished shortly after.

The Siege Map of 1648 shows a stylised plan of siege works around the town including trenches and palisaded forts built outside the town by the Parliamentarians and corresponding Royalist defences around the town walls and within the precinct of St John's Abbey.

Archaeological excavations have revealed the sites of three of the Parliamentarian forts. Excavations at Sheepen Hill in the early 1930s revealed a small fort within which latrine trenches and evidence for camp fires were discovered. A possible gun emplacement was also noted to the south of this fort. Part of Colonel Fothergall's fort was recorded to the north of the town walls.

More recent archaeological investigations at High Woods recovered finds including lead powder measures and 85 musket balls, as well as lead casting waste suggesting that musket balls were being manufactured at this location. This suggests that Fort Rainsborough, which is depicted on the Siege Map, is nearby.