Evidence for early human activity in and around Colchester in early prehistoric times is very limited. Recent discoveries on the Norfolk-Suffolk coast have demonstrated that humans first appeared in Britain much earlier than was previously thought. Archaeological evidence demonstrates that the earliest human occupants of Britain were at Pakefield in Suffolk around 700,000 years ago, and at Happisburgh in Norfolk a remarkable 800,000 years ago or more. At this time, a period usually referred to as the Lower Palaeolithic, Britain was a peninsula of the north-western fringe of the Eurasian continent. What is now Britain’s south coast was connected by a chalk ridge running across to northern France, and the English Channel did not exist.

The earliest evidence for human activity in and around Colchester takes the form of handaxes, flint flakes and cores which date from around half a million years ago. These tools were developed by early humans for a wide range of tasks including butchery and foraging. Most of these date from after the Anglian glaciation which occurred around 450,000 years ago. This period of intense cold made Britain uninhabitable by humans as ice advanced southwards until a huge ice front lay over the Midlands and north London. The advance of this huge ice sheet obliterated many of the early river systems and re-shaped the landscape of Britain. The Anglian glaciation appears to have ended abruptly, around 400,000 years ago, and from this time onwards archaeologists find evidence of significant climate change. 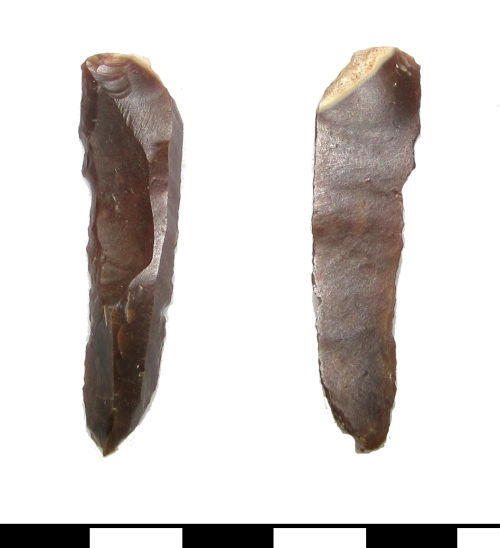 One of the most significant sources of evidence in relation to the end of the Anglian glaciation in Britain is the site of Marks Tey, a few kilometres to the west of Colchester. Here, a lake formed on top of deposits left by the retreating ice. At the bottom of this lake, sediments containing the pollen of plans and trees accumulated. Analysis of this pollen and the identification of plant and tree species has allowed the reconstruction of the nearby environment at the end of the Anglian glaciation. The pollen sequence demonstrates the warming of the climate at this time, and the establishment of plant species that enabled the colonisation of this area by animals including mammals such as horses, rhinoceros, deer and macaque monkeys, along with their predators including lions, wolves and humans.

Artefacts dating from the Palaeolithic have been found in and around Colchester since the late 19th century, and handaxes, perhaps the most characteristic artefacts of this period, have been found at several sites across the Borough.

Several other recent finds from this period have been reported via the Portable Antiquities Scheme, including an unusual object from East Mersea, an incomplete handaxe from Eight Ash Green and an Upper Palaeolithic bladelet (pictured), found near Colchester.

The Mesolithic period (Middle Stone Age) started around 10,000 years ago and is characterised by humans starting to use very small flint tools known as microliths. This technological adaptation is thought to have been brought about by the end of the last Ice Age and the expansion of forests across most of Western Europe. These dense forests proved a more challenging environment for hunter-gatherers, who developed bow and arrow weaponry in order to hunt animals in dense forests.

There is evidence of human activity in and around Colchester during the Mesolithic, with microliths being found during archaeological excavations and as stray finds. Other Mesolithic finds include flint axeheads found at sites such as Parsons Heath, Stanway, High Woods and at St Mary's Hospital and flint blades such as those found at Sheepen and in Tiptree churchyard. A larger assemblages of artefacts found at Birch suggests that flintworking was taking place at that location at some time in the Mesolithic period.