The Bronze Age marks the beginning of the use of metal (bronze) and in Essex this period starts around 2000 BC. Evidence for Early Bronze Age activity in and around Colchester is limited but flint tools of this period have been recorded including a flint knife from Gilbert Court, maceheads from Harwich Road and Westley Avenue, an arrowhead from Sheepen and a dagger from Fingringhoe. 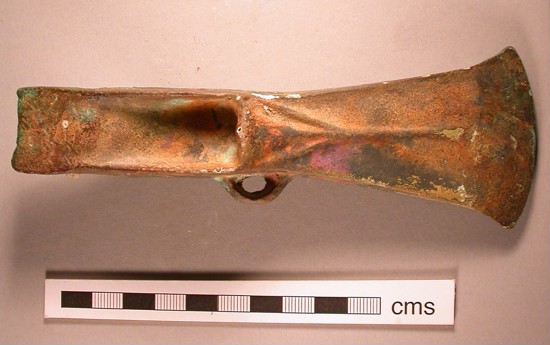 Later finds from in the area include characteristic tools and weapons including palstaves, socketed axeheads and, more unusually, a complete Late Bronze Age sword found on the foreshore at East Mersea. Another spectacular find dating from the Middle Bronze Age was the Sheepen Cauldron which was discovered in 1932. This is one of the earliest cauldrons found in Britain and is of major importance for the history of technology because it represents the introduction of sheet metalworking. The Sheepen Cauldron is currently on display at Colchester Castle.

The Middle Bronze Age (1500-1000 BC) is characterised by the appearance of grouped cremation cemeteries and the adoption of a distinctive type of pottery known as Deverel-Rimbury type. This type of pottery has been found on at least seven sites in and around Colchester, indicating cremation burials. These finds were recorded at Sheepen as early as 1889 when workmen laying a drain in Water Road (now Sheepen Road) noted at least seven urns in a cluster. More recently, at Chitts Hill, West Bergholt the Colchester Excavation Committee excavated a Bronze Age cemetery, ahead of the construction of a quarry. This cemetery lies on the southern slopes of the valley of the River Colne and was discovered in 1973. Seven ring ditches indicative of Bronze Age burial mounds or 'barrows' were recorded, and at least 13 cremation burials were excavated. Another barrow cemetery comprising five round barrows is recorded within the floodplain of the River Colne and at its confluence with Salary Brook close to the former Moler Works at Hythe. A group of 11 ring ditches at Dedham indicates the site of another Bronze Age barrow cemetery. Ring ditches and barrows are also visible on aerial photographs at numerous other sites around Colchester, and many of these are likely to relate to Bronze Age burial mounds.

Although there is considerable evidence for Bronze Age funerary activity in this area, there are still very few sites where Bronze Age settlement can be attested. The most commonly discovered archaeological features that may relate to occupation or domestic activity that can be dated to the Bronze Age are pits and ditches, which are recorded at several sites in an around Colchester. To the south of Colchester, at Frog Hall Farm, a Late Bronze Age house was excavated in the 1970s.